From 01.08 to 30.09.2017 Special Activation Station to memory 85th anniversary Challenge 1932. The Challenge 1932 was the third FAI International Tourist Plane Competition.Challenge 1932 takes place in Berlin. The Polish crew of Franciszek Zwirko and Stanislaw Wigura win it in the RWD-6 plane. A closing ceremony was held after the maximum speed test on August 28. The winners were the Polish crew: pilot Franciszek Zwirko and mechanic Stanislaw Wigura, with 461 points. Their success was not only a result of their aviation skills, but also of the technical features of their Polish-designed RWD-6 (which Wigura had co-designed). Due to Zwirko's victory, the next Challenge 1934 was organized in Warsaw. You will find the excitement of a possible QSO with a station 161LV/ZW  I think that prepared by me QSL card collection will complement many a friend, a brother of the band 11 meters.

This is the official QSL card for the event 161LV/ZW 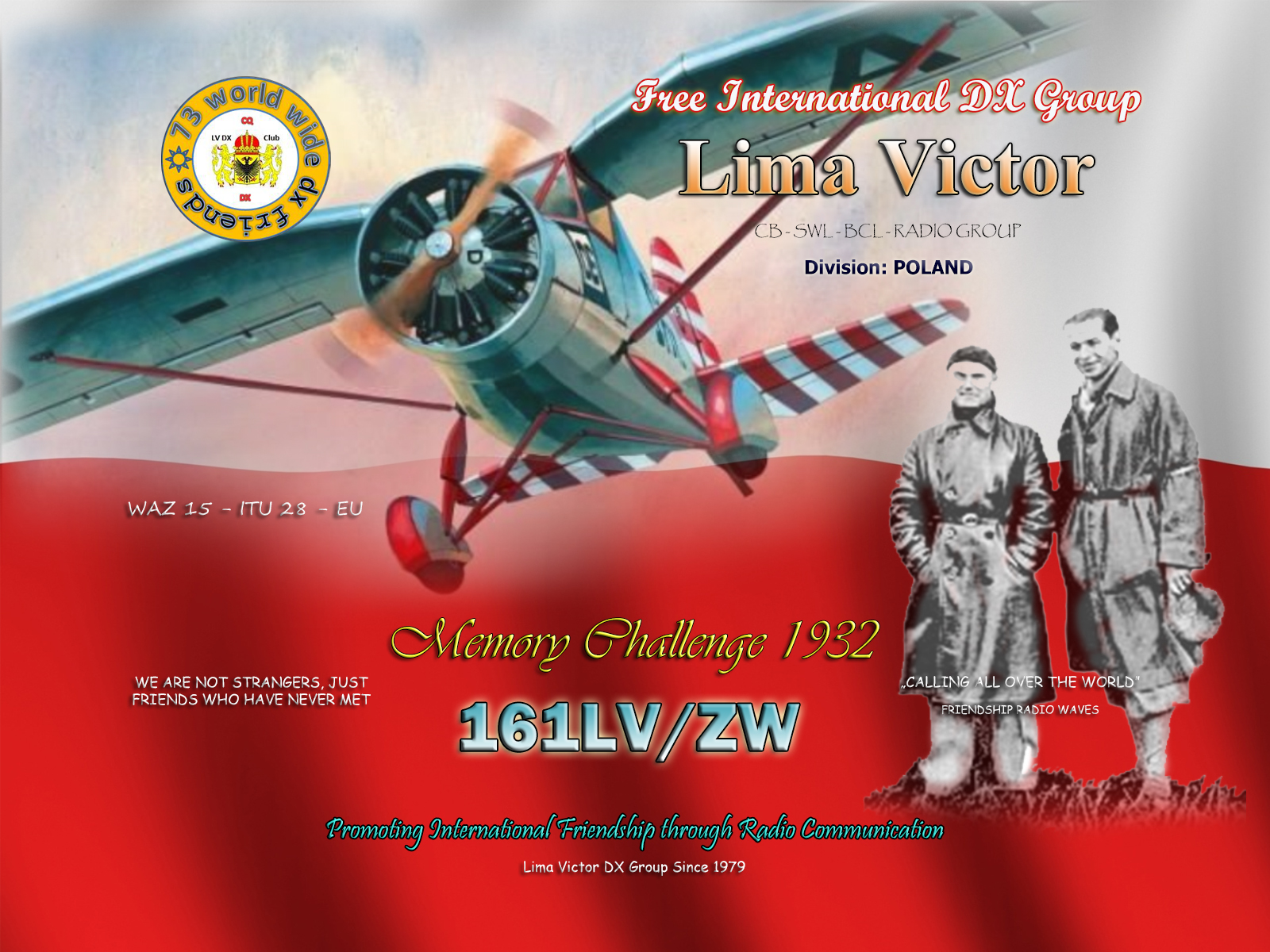 As part of a special working DX stations 161LV/ZW. It is possible QSO digital transmission. The frequency at which it will listen and the ability to conduct a QSO 27.500 MHz USB PSK31, ROS 27.635 MHz USB, SSTV 27.700MHZ USB I invite all fans to digital communications with the station 161LV/ZW

Tomek 161LV0018 months ago
Kev, i sended eQSL via ClusterDX.com and also eqsl.cc

Regards! See You soon! 73s
walsham kevin8 months ago
hi I am 26 CT 4397 op kevin i made contact with you on 27.625 usb I would like to email you my qsl will that be ok if so my email address is swlcard@virginmedia.com or find me as 26ct4397 on eqsl.cc t
13PR184 Michael9 months ago
Many thanks Tomek for the nice contact, it was a great pleasure for me to catch you in your S.E.S.

Fred9 months ago
73's Tomek! Thank you for this Nice contact.14 fdx 088 portable.Contact on You Tube web site. Bye. Fred
Tomek 161LV0019 months ago
TNX for QSO Moritz! See You soon again! 73s
Shoutbox Archive
By using the site you agree to our privacy settings and understand that we use cookies. Some Cookies may already have been set.
Please click the button `I Agree` it to hide this bar. If you continue to use the site with no action taken, we'll assume that you consent to our privacy policy anyway.